For the governmental pronatalist policy in the 2010s, “life planning” has been a key phrase. Various kinds of activities have been conducted to encourage youths to make a life plan regarding marriage, children, and other family issues. Lectures and textbooks are prepared for young men and women to guide their choices, as well as public-subsidized services to offer suitable arrangements for those seeking potential marriage partners [14].

An instance of such activities was the above-mentioned supplementary textbook for health education in high school [37]. In addition, local governments have been involved in life-planning guidance for youths.

The central government of Japan established a scheme of subsidy for projects to solve regional population problems by the initiative of each local government. The supplemental budget of fiscal 2013 introduced the scheme of financial support for countermeasures against regional problems related to the declining birthrate (地域少子化対策強化交付金). It subsidizes such a kind of projects as providing information for those seeking potential marriage partners, holding lectures on life planning, and publishing media contents to teach medical knowledge about fertility. Local governments make proposals based on their own analysis of the population problems they face.

Before this subsidization scheme started, some local governments had made their own effort to develop life-planning education. There had been two roots of such efforts. One was an effort to prevent unintended pregnancy and promote reproductive health/rights [57]. The other focused on liberation from gender roles to realize gender equality through work/family decision-making [58].

Since 2014, the new subsidization scheme encouraged local governments to offer the residents information for their life planning. Various booklets, leaflets, websites, movies, and mobile applications have been produced utilizing financial supports from the central government. Notwithstanding the wide variety in their contents, style, and orientation, those products commonly feature medical knowledge about fertility as an important resource for youths' life planning. Many of them contain the graphs we have already seen.

Among visual representations featured in the publications, we can find cases of deterioration owing to repeated duplications without referring to the original.

For example, the falsified graph of women's fertility we have seen in Figure 6 was used in Nara Prefecture's life-planning booklet [59]. It is obvious that the writers of the booklet did not check the original paper; as such, they could not notice the fact that the graph had been falsified. In addition, they reproduced it from a YouTube movie [60], resulting in an inaccurate copy of the already falsified graph. A further distorted version of the graph (Figure 13) is found in the website of Mie Prefecture [61]. It exhibits a winding curve with a taste of handwriting. Although no source is mentioned, it maintains the characteristics of the series of graphs rooted in Bendel and Hua's study on natural fecundability [29] in which the curve peaks at the age of 22 years and then rapidly decreases. 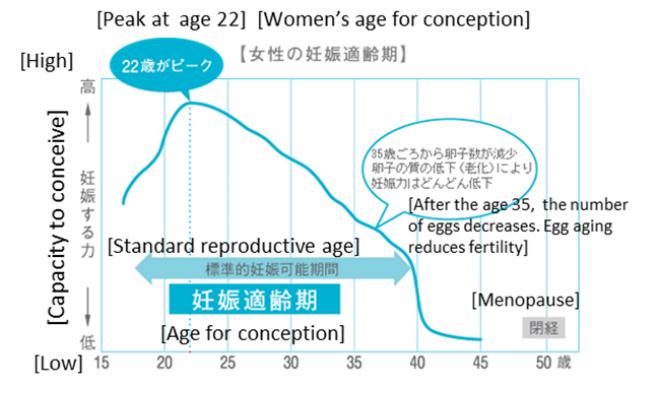 There is another series of graphs perfunctorily copied without referring to the original study. We have already seen the manipulated graph of the number of eggs (Figure 2) as a product of a research project funded by the government [16] [17]. The graph provides citation as “Acta Endocrinol Sullpl,” which is obviously an incorrect abbreviation for the journal Acta Endocrinologica Supplementum. This citation mistake has been repeated over the generations of copies of the graph published by local governments [62] [63] as well as the inaccurate values on the axes and the curve.

Local governments now continue making and broadcasting this kind of information, utilizing a huge budget backed by the central government of Japan for countermeasures against the shrinking population. Even supervised by professionals, it is a hotbed of unscientific knowledge. Distorted graphs are being reproduced for the sake of the visual impact on audience. There is no checking system functioning; authors and supervisors do not access the literature to confirm the original data for the graph they are citing.