Figure 8 is adapted from images on the Web. It looks as if a woman's “likelihood of getting pregnant” linearly decreases along with her advancing of age. The downward curve is always used in combination with an upward curve for the “likelihood of infertility.” Such charts are widespread on the Internet. A Google image search yielded more than 200 hits of the chart (November 5, 2016).

Figure 8: “Likelihood of getting pregnant” curve 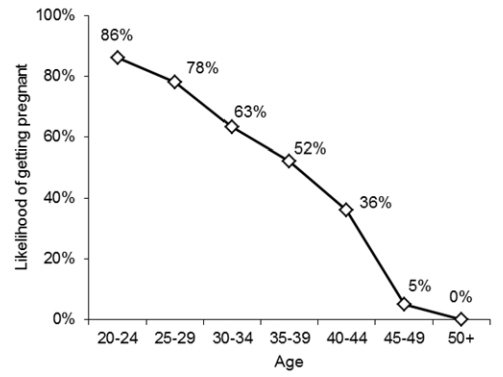 Some versions of the charts refer to Helen A. Carcio's book, Management of the Infertile Woman [39]. A table in that book contains four numbers (i.e., 86, 78, 63, and 52) under the heading of “Percent Conceiving Within 12 Months” (Table 1). These data are identical to the first four points for the 20s and 30s on the curve in Figure 8. However, the book specified no data source. It is not clear where the four percentages came from [38].

Table 1: “Probability of pregnancy with advancing age” by Carcio's Management of the Infertile Woman [39] p. 39 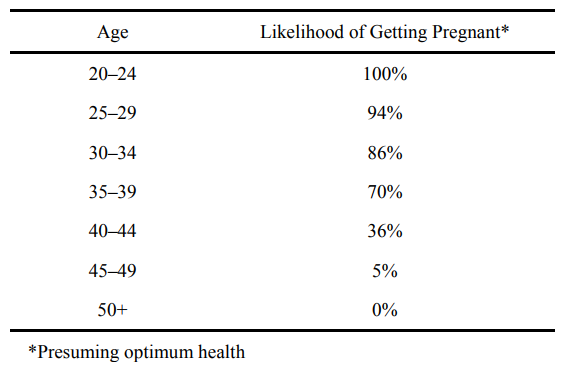 Rosenthal's table is problematic because it indicates no likelihood of getting pregnant in reality. These figures are based on age-specific marital fertility rates from several natural fertility*1 populations [42] converted into ratios to the baseline at the early 20s. Accordingly, they are not proper figures to indicate one's “likelihood of getting pregnant.” For instance, the value is “100%” for women aged 20-24 years because it is selected as the baseline for comparison. For women aged 45-49 years, the value is “5%” because the reported average marital fertility rate [42] for these ages (0.024) is about 5.2% of the rate at the baseline (0.460 for the early 20s). Thus, the values do not indicate the probabilities at which women get pregnant. In this respect, Rosenthal falsified the heading of the table. In addition, Rosenthal appended a note “Presuming optimum health” below the table; however, no such an information is found in the original data [41].

In conclusion, there is no scientific ground found for the “Likelihood of getting pregnant” curve in Figure 8. Among the seven points plotted on the curve, four are of an unidentified origin. The other three never indicate the likelihood of getting pregnant. Unfortunately, it is unknown who combined these data into a curve. Nevertheless, Carcio and Rosenthal are responsible for publishing those groundless or falsified figures.

The groundless linearly declining curve has been widely used for long years in the field of obstetrics and gynecology. In the United States, a similar curve appeared in a book jointly written by a CNN news anchor and a doctor of the New York University Fertility Center [43]. Articles in a German academic journal quoted the figures [38]. In Japan, Yamagata [17] provided an example of an abusive use in education to encourage young women to get pregnant earlier. Fukuoka City [44] recently featured a similar chart in a movie for life-planning education.

-----
Fabricated curve for a woman's likelihood of getting pregnant. (Unscientific Visual Representations Used for the “Egg Aging” Campaign in 2010s Japan, p. 7)

*1:Natural fertility is a demographic term that means people do not intentionally limit the number of their children [41].