The egg aging campaign has also featured graphs that gave a direct impression of the declining fertility with the advancing age of a woman.

Figure 6 shows a falsified graph that was used in a petition by nine academic associations, including the JSOG, to seek actions from the government to introduce medical knowledge about human reproduction in formal school education [30]. In March 2, 2015, they submitted the petition to Arimura Haruko, then the Minister of State for Measures for Declining Birthrate.

Figure 6: Graph of women's fertility used in the petition by professional associations in 2015 [30] 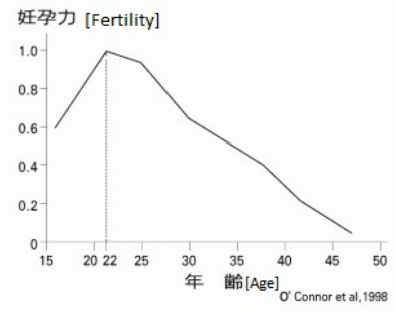 Figure 6 was derived from a statistical estimation by Bendel and Hua in 1978 [29] on fecundability (monthly probability of conception). Because of defects in the method for processing the original data, their result was far from representing women's biological capacity of conception. Specifically, regarding the data for women aged >=25 years, Bendel and Hua only used data for women who married before their mid-20s. The original data [31] were from surveys of American Hutterites*1 in the 1950s and 1960s, including women who married in their late 20s and 30s (two black dotted lines in Figure 7), who exhibited high fertility rates at least in the newlywed period. However, these were excluded from Bendel and Hua's estimation. They performed their analysis only on data of women who married early (two solid blue lines in Figure 7). The result consequently indicated that fecundability declines significantly before the mid-30s, reflecting the fertility rates declining along with the increasing time passed from the day of marriage [32]. Generally, couples tend to be the most fertile in their newlywed period and to become less fertile over time; however, this does not necessarily represent an age-related decline of biological fertility. Rather, it may be attributable to their inactive sexual behavior after the longer duration of continuous marital relationship. 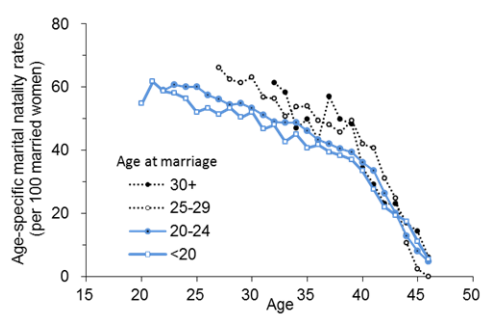 Eleven years after the publication of the paper by Bendel and Hua [29], Wood [33] used their results to illustrate an age-fecundability profile after manipulating the curve to make fecundability peak at the age of 22 years. This curve was then inaccurately copied by O'Connor et al. [34]. The graph that appeared in the petition (Figure 6) was made by Dr. Yoshimura Yasunori, a professor emeritus at Keio University. Yoshimura [35] simplified the curve by extracting only seven points and shifting four of them (each within the 20s-30s range) left along the x-axis. These modifications allowed the curve to show that women's fertility enters a steep downhill immediately after the peak at the age of 22 years.

It is important that the flaw of Bendel and Hua's interpretation of the data had already been criticized in 1979 [36]. Since then, Bendel and Hua's study has been cited only 13 times (according to Web of Science in February 3, 2016), and none of the 13 works favorably appraised the study after assessing its data and method [32]. The result of the citation search thus implies that the study does not warrant an uncritical reference as scientific evidence.

A graph similar to Figure 6 appeared in a high school supplementary textbook for health education [37] published in August 2015 by the Ministry of Education, Culture, Sports, Science, and Technology. Minister Arimura described the textbook as in line with the government's new Outline of policies against low birthrates [8]. When newspapers reported the publication of the textbook, it received criticism for the exhibition of gender bias and for the government's apparent motive to promote childbirth at a young age as a means to raise the nation's birthrate [14].

-----
Falsified graph of women's fertility with its peak at the age of 22 years. (Unscientific Visual Representations Used for the “Egg Aging” Campaign in 2010s Japan, p. 6)

*1:Hutterite is a religious group of Anabaptist known to have a high fertility. Its origin was the Central Europe in the 16th century. A branch of it migrated in North America in the late 19th century.