In 2013, the JSRM launched an official “Q&A” website about infertility issues designed for a general audience [22], which we have already mentioned in p. 5. Figure 9 shows a graph published in the website to answer the questions on how women's fertility declines with their age. The same graph has been used in professional publications, such as the 2014 version of the standard textbook for training doctors in reproductive medicine edited by the JSRM [23] and a handbook for doctors supervised by the chairperson of the executive board of the JSRM [24]. For the books, the chapters that included the graph were authored by Dr. Takahashi Toshifumi, now a professor at Fukushima Medical University. 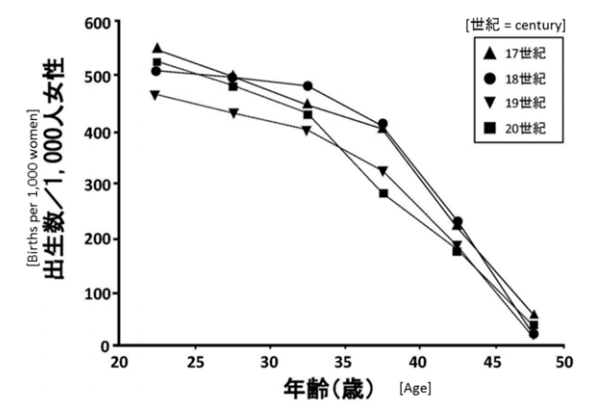 The legend for the graph says that the curves are typical cases taken from the study by Menken et al. [45]. The original graph by Menken et al. showed 10 curves of age-specific marital fertility rates from various natural fertility populations (Figure 10). The JSRM extracted four curves from it to make Figure 9. In this process, the JSRM committed elementary mistakes [46]. The curve captioned “17th century” is in fact from the 20th century data. The curve captioned “20th century” is a composite of two series of the 17th and 19th century data.

Figure 9 gives the overall impression of its steep curves in contrast to the excluded curves. The excluded curves represent a common pattern of a round curve [1]. Their gradient is moderate during the 20s and early 30s and then becomes greater in the late 30s and after. By contrast, Figure 9 has an appearance of a rapid decrease in the fertility rate after the JSRM extracted curves with large gradients from the original. Particularly, the curve captioned “20th century” seems to decline almost linearly as the women age. 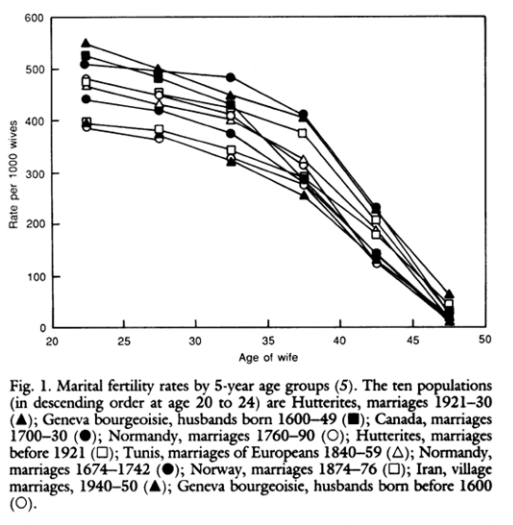 The JSRM [23] also gives a wrong information about the data on which the graph is based. It explains the data as coming from a cohort study of North American Hutterites from the 16th to early 20th centuries.
However, the study was in fact based on secondary data of 10 demographic records from various populations in Europe, Africa, Asia, and North America. Eight of the 10 populations were not North American Hutterites. Thereby, it is clear that the author and the JSRM editorial committee never confirmed the original figure by Menken et al. [45], whose description about the data sources contains European, African, and Asian geographical names as in Figure 10.

In December 2016, after the flaws in the graph were pointed out [46], JSRM's official website [22] discarded the graph. JSRM's textbook also dropped the graph from its 2017 edition [47]. Nevertheless, the JSRM has offered no explanation about how and why the graph was created and used. The same graph has still been featured in books, Web articles, and booklets published by local governments (see p. 11).