Dunson et al. [48] reported the estimated probability of conception for each day of the month for women classified by age (19-26, 27-34, and 35-39 years). Their estimation is characterized by sharp peaks at 2 days prior to ovulation (indexed as “-2”). The positions of the peak show an obvious difference between the high peak for younger ages and the low peak for older ages. This creates the appearance that the advancing age rapidly reduces the probability of conception. The data for this estimation were from a study of seven family planning centers in Europe collected from 1992 to 1996 using a self-administrated diary of intercourses, basal body temperatures, and other factors [49].

In 2014-2015, Dr. Saito Hidekazu presented this depiction [50] at governmental conferences for policy-making about population issues. Saito appended red arrows on the graphs to emphasize the differences among the peaks and to make the impression that fertility rapidly declines with age (Figure 11). 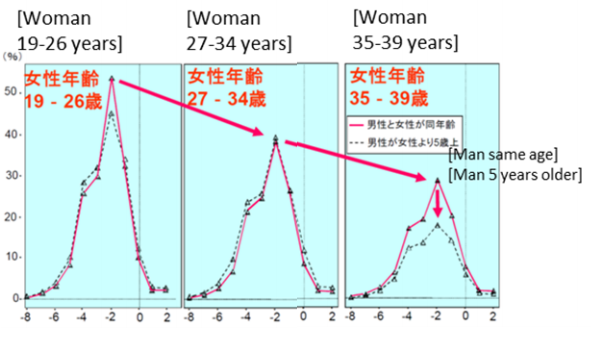 The paper by Dunson et al. [48] does not specify the methods used for their estimation. It explains that they performed a Bayesian estimation; however, it does not give enough information about the model and prior distribution. Therefore, their estimation is not replicable.

As for the model for the estimation, a preceding paper by Dunson [51] has some information to guess the method to obtain the result shown in Figure 11. It describes the model construction under the a priori assumption of the “most fertile day” (MFD); each menstrual cycle has the special day called the MFD on which the probability of conception is especially higher than that in the other days. The model also implies that the estimated probability for the MFD will be even higher when the couple has intercourses more frequently. This suggests that the model may be biased toward estimating a greater probability of conception not only for the MFD, but also for younger couples owing to their frequent intercourses [1].

Thereby, the arbitrary modelling may exaggerate the peaks of the probability of conception, as well as its difference among the age classes. Indeed, the results reported in Figure 11 do not fit to the original data with no salient peak at 2 days before the ovulation (Figure 12). However, the details are not clear because there is not enough information available to replicate the method Dunson et al. [48] used.

Figure 12: Estimation of daily probability of conception from the European multicenter study (1992-1996) 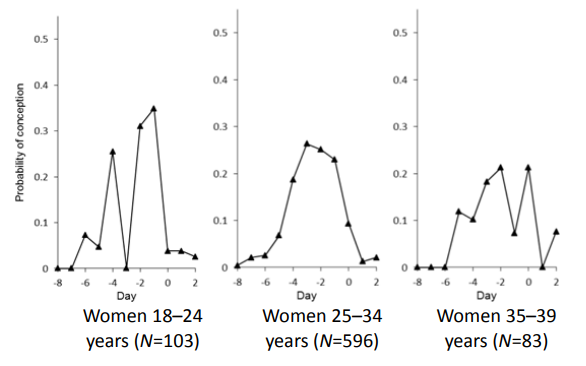 These problems have been overlooked by researchers in the field of fertility study. A citation index search (with Web of Science in January 5, 2017) revealed that among the 194 works citing Dunson et al. [48], only four papers cited Dunson [51], excluding self-citations. None of them discussed the flaws of the statistical model [1]. Thus, the study by Dunson et al. [48] has been referred to without methodological scrutiny at all.

Despite the lack of scrutiny on their validity, graphs, such as Figure 11, have served as if they were scientific evidence that fertility rapidly decreases with age. Referring to the findings of Dunson et al. [48], Kawai [52] stated that women's fertility in their late 30s is about one-half of that in the early 20s. Dr. Saito frequently used Figure 11 and similar graphs in governmental conferences for making the 2015 Outline of Measures against the Declining Birthrate as a ground for his argument that women's average age at childbirth should be lowered to <=25 years.