Figure 2 shows a graph of a woman's age and number of eggs in her body. It was included in a booklet to teach the general audience medical knowledge about human bodies, focusing on sex differences regarding reproduction [16], retrieved from the official website of the Ministry of Health, Labour, and Welfare (MHLW). This booklet was produced by a research group backed by the MHLW research fund for FY2012 [17].

Figure 2: Distorted graph on women's age and number of eggs

-----
Source: Website of the Ministry of Health, Labour, and Welfare [16]. English translation is mine.

This kind of graph on age and the number of eggs is one of the standard items frequently featured for the egg aging campaign. It usually appears in combination with graphs of age-fertility profile as we will see in the following sections in this brochure to substantiate the premise that a woman loses her fertility as she ages so that it is better to have children as young as possible.

This graph is falsified. Although the legend below the graph*1 refers to the paper by Baker,*2 the curve of Figure 2 is quite different from that in the paper (Figure 3). The most remarkable difference is that the eggs continue to decrease during the 20s and 30s in Figure 2, in contrast to the almost constant level maintained during this period in Figure 3. Furthermore, almost all points are plotted at different positions between the two figures. The legend says the MHLW committed the alteration.

Figure 2 also has a mistake that is apparent even without reading Baker's paper. Although it describes in a balloon that a female baby has about two million eggs when she is born, the y value is obviously less than one million at the time of birth. In sum, Figure 2 is far from showing scientific research results. 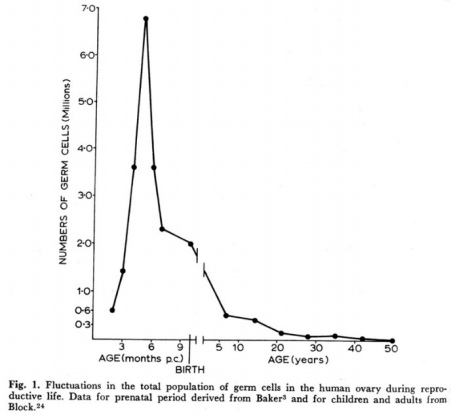 Many publications have used graphs similar to Figure 2. They exhibit a wide variety of appearance and citation. Some of them are not so much distorted and provide correct citations to Baker's paper. The others severely altered the curve or provided inappropriate citations.

Figure 4 is presented in the Infertility Q&A website [22] by the Japan Society for Reproductive Medicine (JSRM) in 2013. The same graph appears in JSRM's textbook [23] and a handbook for doctors [24], which we will revisit in p. 8. The peak value in Figure 4 is higher than that in Figure 3. The points are plotted at wrong locations for the 9th-month fetus, for the time of birth (x = 0), and for the ages of 10 years and over. In particular, the number of egg cells by the age of 30 years seems to have been decreased to almost zero. Because the citation for the graph by the JSRM [22] only refers to the 1963 paper by Baker [20], which does not include results for adults, the right part of the curve is not backed with data.

Figure 4: Fabricated graph of the number of egg cells 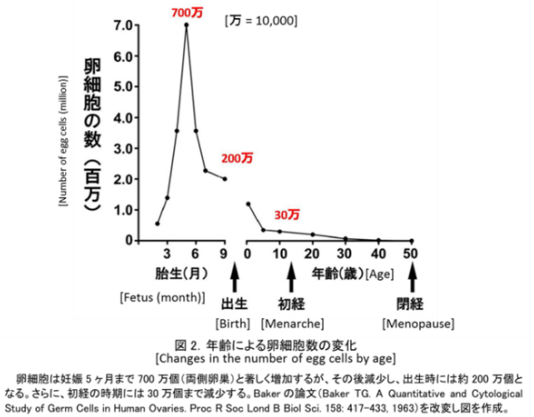 -----
Source: Japan Society for Reproductive Medicine [22].
English translation is mine.

We should also focus on the usage of this kind of graph as evidence for the argument that a woman's fertility rapidly decreases as she ages, and this decrease begins at a very early period of her life. This argument might have been started with the 2009 book by Dr. Asada Yoshimasa [25] in which he provided information that given the stock of 300,000 eggs a woman has when she is 12 years old, she subsequently loses 1,000 eggs every month so that the stock will run out when she becomes 37 years old. Unfortunately, Asada gave no bibliographical reference for his argument.

It is doubtful that such an explanation helps understand fertility problems. Cited studies on the number of eggs [20] [21] did not address fertility. Indeed, although a large number of eggs disappear in one's teen ages according to Figure 3, those ages are also the stage for development of reproductive capacity for humans according to biology.

Notably, there is a difficulty in obtaining sample ovaries for determining the average number of eggs (or follicles). To obtain “normal” ovaries for the result presented in Figure 3, Block [21] screened cases of sudden deaths and selected 43 cases aged from 6 to 44 years. The counted number of eggs greatly varied among cases. We should be aware of errors owing to the small sample size, as well as the preliminary statistical method.

There have been studies that complement Block's findings. Faddy et al. [26] reported the result of estimation of the number of eggs in the ovaries reusing Block's data and some additional data from other sources. They adopted a statistical model with linear equations to predict the logarithmic number of eggs. The results implied that the coefficient for the effect of age switches at the age of 37.5 years --- that is, the reduction rate of the number of eggs accelerates after the woman reaches the age of 37 years.

The result by Faddy et al. has also been reproduced in distorted ways. Figure 5 shows a graph in an article by Dr. Koike Koji published in 2000 on the official journal of the Japan Society of Obstetrics and Gynecology (JSOG) [27]. Although it has no citation, the curve on the graph is similar to a graph by te Velde et al. [28], which cited Faddy et al. It is a composite of eight small segments of line, in contrast to the result by Faddy et al. made from two lines concatenated at the age of 37.5 years. Thus, in Figure 5, some points are plotted in the positions where no point was plotted by Faddy et al., such as 18, 31, 41, and 45. In addition, while the estimation by Faddy et al. was for the period after one's birth, Figure 5 extends the curve to the prenatal period, seemingly based on Baker's work [20]. Furthermore, at the age of 31 years, a note “Decrease Ferility“ is inserted. Te Velde et al. [28] suggest that it is affected by the manipulated data by Bendel & Hua [29], which we will see in the next page.

Figure 5: Compounded graph of the number of follicles 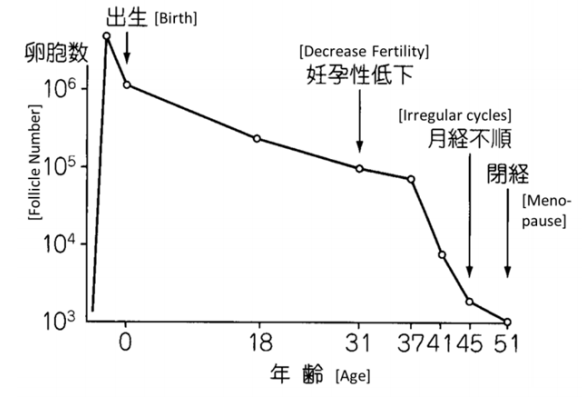 -----
Exaggerated decreasing of the number of eggs in women's ovaries. (Unscientific Visual Representations Used for the “Egg Aging” Campaign in 2010s Japan, pp. 4-5)

*1:The citation of Figure 2 contains a mistake in the journal title, as we will see in p. 11.