The egg aging campaign in Japan was triggered by the results from the cross-national survey, the International Fertility Decision-Making Study (IFDMS), conducted in 2009-2010 by a Cardiff University research group supported by the global pharmaceutical company Merck Serono. The results of the IFDMS showed that respondents in Japan exhibited a low level of fertility awareness measured using the Cardiff Fertility Knowledge Scale (CFKS).

The findings of the IFDMS were published in an academic journal [9] in 2013. However, before then, it had already been used in lobbying activities and leaked to the media. In February 2011, the head of the IFDMS project, Jacky Boivin, visited Japan and held lectures for the media and for members of the Diet [1]. Thereafter, the results from the IFDMS were featured in newspapers, popular magazines [10], and TV programs [5]. These media contents resulted in the widely accepted view today that the Japanese have incorrect or distorted knowledge about pregnancy and childbirth.

The IFDMS also influenced the views of the government. In 2012, Diet member Noda Seiko mentioned the findings of the IFDMS in a question to the Cabinet [11]. In 2014, Saito Hidekazu, a doctor at the National Center for Child Health and Development, included Figure 1 in his presentation at a governmental conference on population policies [12]. On the graph, which had been reproduced from the original paper [9], Saito added explanations in Japanese that Japan's CFKS score was the second lowest among the surveyed countries, next to Turkey; therefore, education on human fertility was needed. Following the opinions by Noda and Saito, the government aimed to improve education on fertility. The 2015 Outline of Measures against the Declining Birthrate [8] set the numerical goal based on the results of the IFDMS.

Figure 1: Mean Cardiff Fertility Knowledge Scale scores by country and sex according to the IFDMS 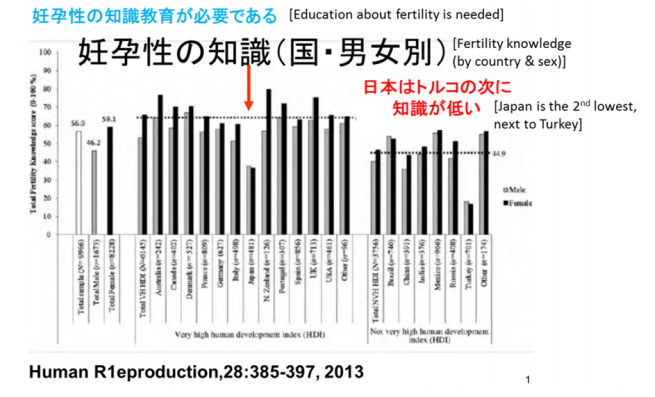 -----
Source: Saito [12], a document prepared for a governmental conference in 2014.
Japanese texts are added by Saito Hidekazu (with my translation in English).

Today, it is known that the IFDMS has many defects, including as follows; its results are unreliable [13] [14]:

Nevertheless, the study has been treated as offering credible scientific evidence. By 2015, the notion that the Japanese have the lowest level of fertility literacy among countries of the world had become already widespread. When criticism emerged against the IFDMS in 2015 [15], it was too late to convert the approved policy and the established self-image of Japan as a society lacking knowledge about fertility and childbirth.