Misconduct by obstetrician-gynecologists in Japan

The Mainichi website reported that Ministry of Education, Culture, Sports, Science and Technology of Japan (MEXT) used a falsified and inappropriate chart about age-fecundability profile of women in a new side-reader titled "To lead a healthy life" for high-school students: (http://mainichi.jp/english/english/newsselect/news/20150902p2a00m0na011000c.html 2015-09-02 The Mainichi)

Japanese media first reported this scandal on August 25. Mainichi Shinbun's August 25 article reported that the falsified chart had been offered by Dr. Yoshimura Yasunori (吉村泰典), former president of Japan Society of Obstetrics and Gynecology (JSOG). The Cabinet Office mediated between him and MEXT (http://mainichi.jp/select/news/20150826k0000m040058000c.html 2015-08-25 毎日新聞). The article also carried Dr. Yoshimura's comment that the falsified chart had been widely used by obstetricians and gynecologists for many years, but its author was unknown. However, we have so far discovered four copies of the falsified chart on the WWW, and Dr. Yoshimura is associated with all of the cases. The earliest case is on the website of "YOSHIMURA BIOETHIC INSTITUTE" represented by Yoshimura himself, and the chart is quoted in an article with a signature "吉村やすのり" [Yoshimura Yasunori]: (http://htn.to/iwLzgH 2013-06-25)

In another case, the falsified chart was used in a document co-authored by JSOG and other 8 academic associations. In January, 2015, they submitted the document to Arimura Haruko, Minister of State for Measures for Declining Birthrate, to seek action from the government to introduce medical knowledge about human reproduction in formal school education. The falsified chart was featured as the first figure in the document (http://www.jfpa.or.jp/paper/main/000430.html 2015-03-01 Japan Family Planning Association)

In the falsification, the chart was modified to emphasize the peak at age 22 and the sharp decline of women's fecundity after their mid-20s, making the declining curve almost linear (see comparison of the curves: https://twitter.com/twremcat/status/638645227415207936). Citation for the chart was also inappropriate. The given citation indicated only the first author and the publication date, as "O'Connor et al, 1998", to prevent identification of the source. The falsified chart also has no caption to explain data source and the meaning of the curve. The curve is, in fact, based on the estimated "fecundability" from surveys of "natural fertility" (using no contraceptive techniques) populations from Taiwan in 1960s (Jain 1969) and from North American Hutterites in 1950s (Sheps 1965). Estimation (originally proposed by Bendel and Hua (1978)) used age-specific marital fertility rate (ASMFR) of women those who married in their teenage or early 20s, so that the result represented lifecourse of those who married young. But the chart gives the readers no clue to understand the characteristics of the data.

It is obvious that an age-fecundability profile largely represents socio-cultural factors such as age at marriage, sexual behavior pattern during marital life, and family lifecycle. The standard textbook in this field (Wood 1994: Ch. 7) repeatedly cautions not to equate fecundability with the biological power to conceive. However, on the page 40 of the new side-reader edited by MEXT, the chart is accompanied with a text mentioning women's ability to conceive in the medical term. It is located in a misleading context, as if it demonstrated a natural law ruling all female human beings. The chart is so unscientifically misused. It is thus inappropriate for an educational material for high-school students.

Yoshimura Yasunori and the nine academic societies have so far made no explanation. Obstetrics/gynecology doctors and researchers are still in silence. They have given no account of the misconduct of their associations. Ten days have passed since the first report by newspapers on August 25.

Note that Dr. Yoshimura is Special Advisor to the Abe Cabinet in charge of measures to counter the declining birthrate (http://japan.kantei.go.jp/tyoukanpress/201303/13_p.html 2013-03-13). The scandal reflects both the government's intent to boost the birthrate and academics' ambition to behave as political handlers. 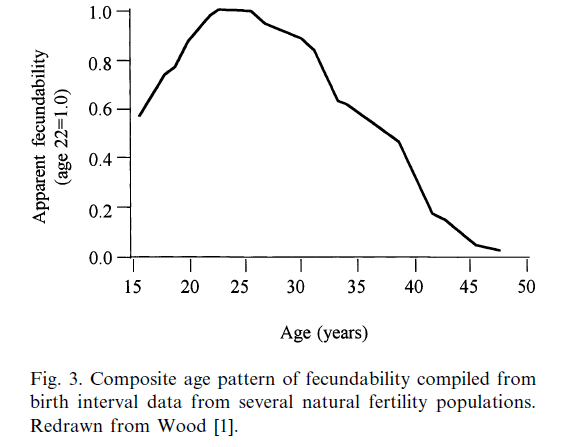 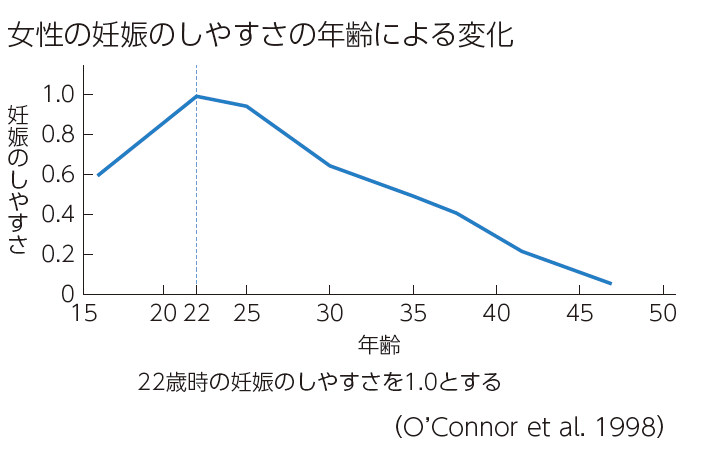 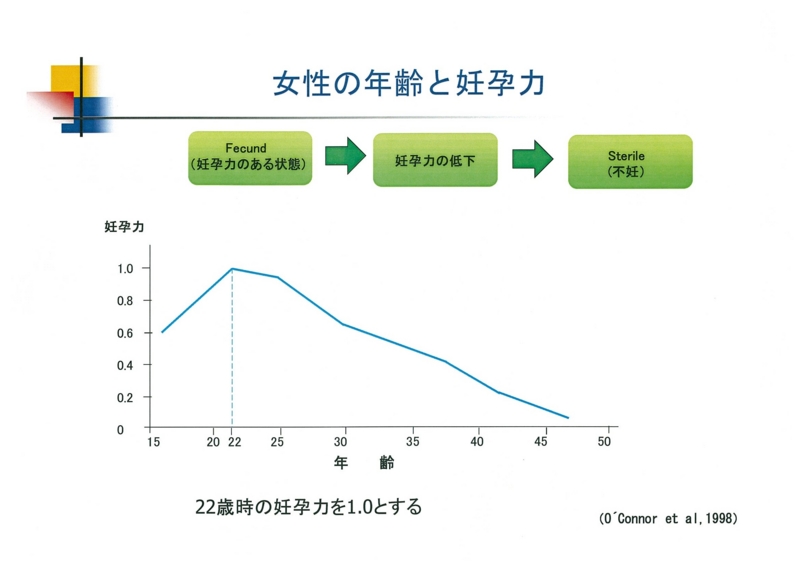 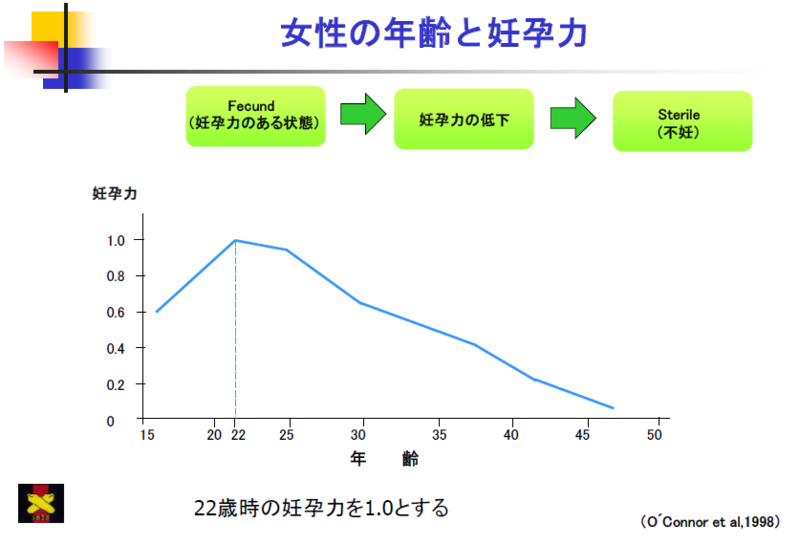 Comparing the falsified curve to the original, we can understand how the falsification was conducted: Seven points were selected from the continuous curve of the original chart, and three of them were moved to left. We can thus obtain a curve with a sharp peak at the age of 22 and then an almost linear decline between 25 and 47.

Handwritten annotations by Tanaka (@twremcat) on the image comparing between the original and falsified curves by @litulon (https://twitter.com/litulon/status/634950919143092224/)
Coordinates like (33, 0.62) are from Bendel and Hua (1978: 213, 216). Coordinates for points those remained on (or near to) the falsified curve are in red, while those dislocated after falsification are in blue. 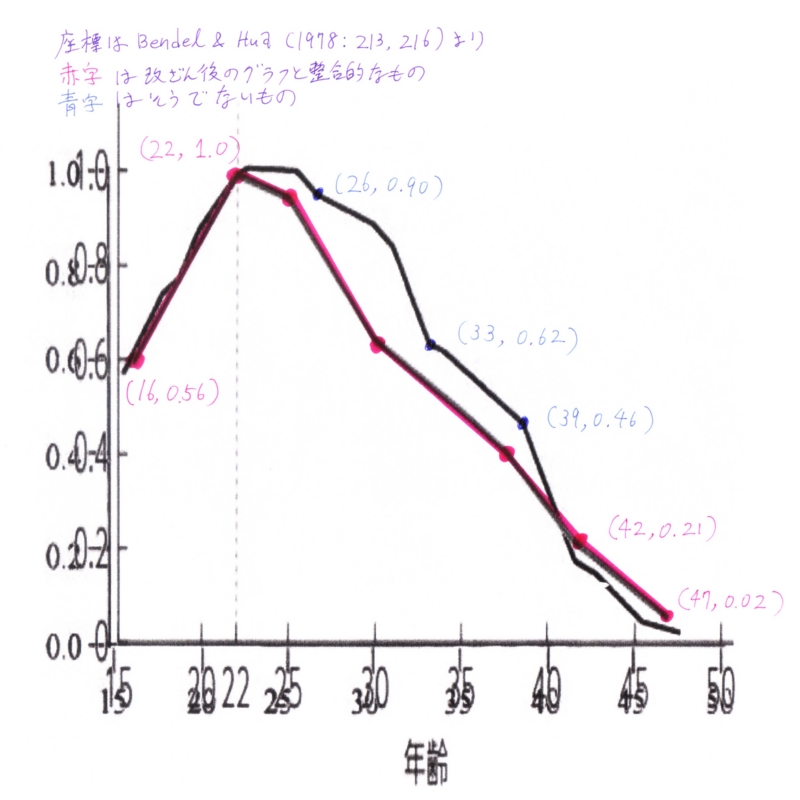 Author of this article